Nothing Surpasses the Beauty and Elegance of a Bad Idea 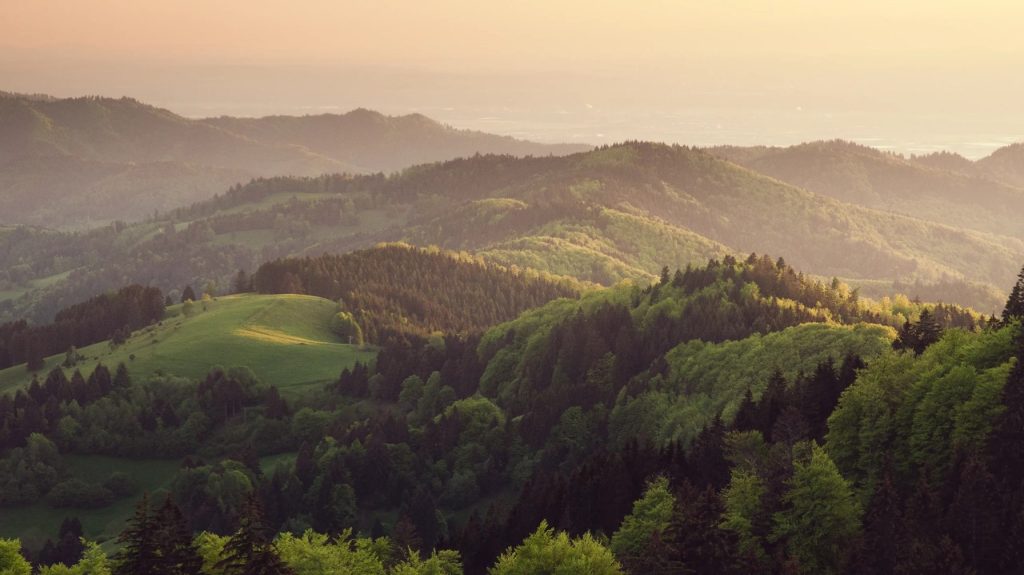 It hasn’t taken long for governments to notice the EU ETS, spitting out revenue at the rate of half a billion euros a week, and get the idea that here is a mechanism ready-made to be exploited at a time of crisis.

Last week the Spanish and Greek governments announced that they would be taking some of the additional revenue from their share of EUA auctions, and using it to support vulnerable consumers suffering the impact of soaring energy prices.

So far, so fair. Obviously, it would be more “on-mission” if that funding was used for climate purposes, but we’re in a crisis, and everyone must carry their share. EUAs have more than doubled in price this year, so that’s a healthy chunk of change rattling around EU treasuries looking for a home.

Then, at the meeting of EU energy ministers in Slovenia today, Greece presented a paper suggesting that the bloc could sell additional EUAs, or advance the sale of future EUAs, in order to generate even more money to help mitigate high gas prices.

My former colleague, the ever-excellent Ewa Krukowska reported for Bloomberg:

“To help nations shoulder soaring energy costs, the Transitional Hedging Fund would raise money from sales of carbon emission permits in the EU Emissions Trading System, possibly through additional auctions or “an advance payment of expected future EU ETS revenues,” according to the document. The EU could auction allowances that would normally be sold in the coming years.”

In short, the suggestion is that the EU either: a) creates some new EUAs to sell, b) gives member states an advance on future EUA revenue, or c) brings forward the sale of EUAs from future years.

I hope we don’t need to linger on why option a) is a truly, horrendously bad idea. But just in case we do…

Inventing new EUAs basically renders the EU ETS Directive meaningless. It tells the market that the EU can at any time decide to alter the supply of EUAs without any reference to the actual demand for allowances. Market confidence would evaporate, and I wouldn’t expect the price of EUAs to remain in double-digits for long.

Option b) is less outrageously harmful, but it isn’t ideal. By giving member states a hefty (at current prices) advance on their EUA revenue, the EU is effectively lending them money, probably at zero interest, without any real, firm schedule of repayments, since the price of EUAs determines the rate of repayment.

Imagine: an interest-free source of short-term revenue to plug fiscal holes, pay for pre-election largesse or balance the budget. You think member states would stop at helping stave off an energy crisis?

Let’s just do some quick numbers. The 27 EU member states have sold a total of 441 million EUAs so far this year, generating a total of €21 billion.

Finally, option c) already exists, in a way. Under Article 29a of the directive, the regulator may bring some additional EUAs forward for sale to combat price spikes. The formula to calculate whether this should happen is pretty convoluted but it exists.

However, there is no provision for bringing forward EUA sales to help cap the cost of natural gas, and I’m guessing that it would require some sort of unanimous legislative action in very short order. Not very likely.

Better yet, Bloomberg quotes the Greek delegation saying: “This way, companies will be able to buy up enough carbon credits to fully hedge their exposure to the carbon price,” Greece said. “A rough estimate of the amount needed for winter 2021-2022 is around 5-8 billion euros.”

This presupposes that the EU ETS exists for some purpose other than to put a cost on carbon and that companies don’t already hedge their carbon exposure. It’s a forehead-smacking moment.

It betrays a worrying lack of understanding about the market and how it works. How can bringing forward more EUAs, or even inventing new EUAs, allow companies to buy carbon allowances any easier than they can today? We have daily auctions already! We have a surplus of 1.6 billion allowances already, much of which member states sold into the market!

And you want more supply?

Maybe they do? Maybe by pouring more EUAs into the market they expect prices to drop and more companies and investors to buy? That’s pretty cynical, even for governments.

No. They just want money. There have been quite a few headlines and news reports in recent days in which officials hint, or suggest, that high carbon prices are to blame for this energy cost crisis in Europe.

I’ll post just one familiar chart to illustrate where the problem really lies. 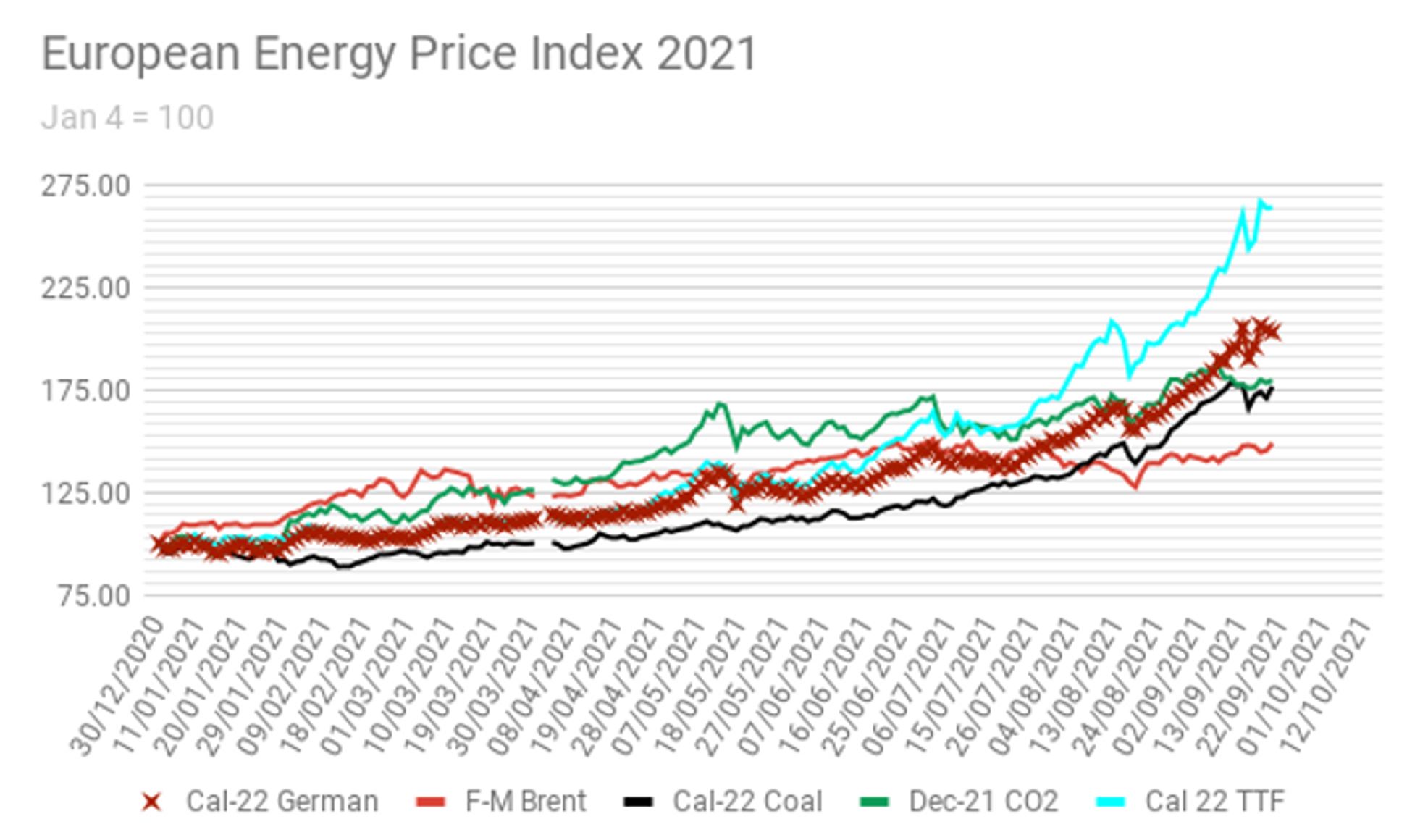 (Hint: it’s the sky-blue line you want to look at.)

A high price of carbon does not raise the cost of natural gas. It does affect the price of electricity, but gas is a completely different animal.

(EDIT: To be precise, a high price of carbon doesn’t raise the cost of producing natural gas. It may impact the price of gas in an open market such as the EU’s, through its impact on the power generation market.)

Even if it goes nowhere in the short term, this Greek proposal has the potential to have pretty wide-ranging effects.

One of the reforms to the EU ETS that’s being considered under the Fit for 55 package is to make a one-off adjustment to the overall cap on emissions for the period 2021-2030. The Commission proposes this in order to ensure that the EU meets its 55% reduction target for 2030.

But given the discussion that Greece has just triggered, it’s possible to envision a negotiating scenario where that one-off reduction is “sacrificed” to generate the additional funds that the country wants.

In this scenario, instead of a number of EUAs being cancelled in the one-off adjustment, they could be sold into the market on behalf of the member states, and to make up the reduction, the market cap would shrink at a faster pace each year (the Linear Reduction Factor).

Otherwise, there could be any number of amendments to the Fit for 55 package setting up some sort of fund to alleviate energy poverty, or creating a new reserve of EUAs for just such a situation in the future.

All in all, energy ministers didn’t cover themselves in glory today, and the worry is that if this gas price drama continues or worsens more people are going to work out that, instead of making fossil fuels more expensive to save the climate, making climate targets harder to achieve is the best way to make fossil fuels cheaper.

This article was first published on www.carbonreporter.com

Alessandro is an independent journalist with more than 30 years of experience in energy markets. He joined Carbon Pulse on a part-time basis in July 2021 to report on carbon markets and climate policy from London, while continuing to freelance for a handful of other energy-related publications. Since 2004 he has also worked as a journalist and analyst covering global carbon markets and climate policy. Alessandro has written for S&P Global Platts and Bloomberg, and since 2015 as a freelancer for publications including Carbon Pulse, Petroleum Economist, Interfax Energy and Gas Strategies.